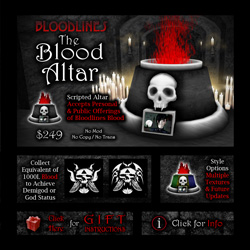 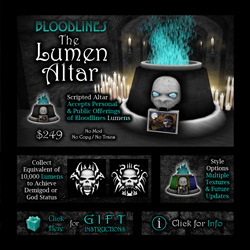 The Blood and Lumen Altars allow you to accept sacrifices on behalf of a specified King, Queen, or Alpha. If they receive enough sacrifices, they will become Demigods or Demigoddesses, and can compete with other Demigods to become the Vampire, Lycan, or Hybrid God or Goddess.

To set up your altar:

To sacrifice to your own altar, select 'Sacrifice' from the menu, and you will be given options to sacrifice directly from your veins, or from a container. If someone else clicks on your altar, they will go directly to the sacrifice menu.

All sacrifices are combined and converted to 'Blood Equivalent'. One Blood Equivalent is equal to 1 liter of Vital Blood, 10 Lumens, 1 Therm of Ichor, 10 Auras of Ether, or 20% humanity.

A King, Queen, Alpha, Archangel, or Archdemon ascends and becomes "Deified" once they have received 1000 in Blood Equivalent. Once they are Deified, they have the bonus status of "Demigod". The player with the most sacrifices of each race is the God of that race.

The altar comes with texture and size options that can be accessed by selecting Texture from the main menu, or Settings > Size. You can also turn the hover text on and off through the Settings menu.

Bloodlines players can find the locations of any altars that have been set up for a given avatar by mousing over the deity icon on anyone's profile. The tooltip that appears has an 'Altars' link that can be followed to get a list of where all of the altars are where one can sacrifice to that member. The altar will attempt to keep this position updated correctly, but if you find that the position where the system thinks the altar is is not correct, you can manually update the position by going to Settings > Update Position.